New System for an Existing Line

As new projects roll in, we are confronted with a variety of challenges that vary as much as the different parts we are challenged to feed.  Many times we are tasked to design and build feeding systems for new productions and assembly lines.  In these cases, we have a bit more freedom to design systems to our preference, only being limited by the flexibility of neighboring machines.  Other times, however, our challenge is to construct a feeding system to mesh seamlessly with an existing line, which was the case for a recent project with a customer in the automotive industry. 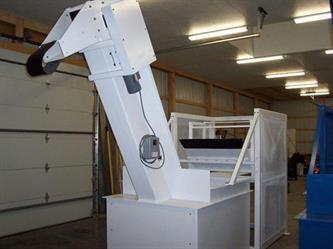 This Tier 1 supplier was experiencing a great deal of issues with a large metal housing feeding system that included a heavy duty elevator, vibratory feeder, inline track, and isolation mechanism.  Additionally, the entire system was housed inside of a sound isolating room, which provided spatial limitations.  After discussing some of the issues with our customer we identified problem points with their current system and came up with a plan to reduce or eliminate them wherever possible.

To begin with, we made sure the elevator was sturdy enough to handle the sharp edges of the parts as well as “open” enough to ensure no parts would lodge themselves in between the slats of the belt.  This meant we had to identify and open up critical pivot points and close-off excess space in corners and confined spaces.  For the feeder bowl itself, we began with an inside-tooled concept which greatly simplified the operation of the tooling.  A simpler concept reduces the weight on the vibratory drive unit, making it much easier to tune the system and 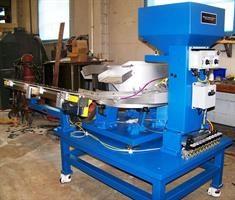 achieve an optimal running conditions.  The addition of a variable frequency controller made it possible to find the exact natural frequency of the bowl and even compensate for the changes in weight as more or fewer parts made their way through the system.  Finally we had to move the parts out of the way of the feeder bowl itself and into an isolation mechanism to move on to the next phase of production.
Hoosier Feeder Company provided a superior feeding system to replace the old, all the while making sure to avoid existing fixtures and to fit comfortably within the existing sound room.  We run into special cases everyday that challenge a “standard” feeding system and we take the challenges head-on.


If you think your production line could be improved by a new or higher functioning feeding system, never hesitate to shoot us an email or give us a call to talk through your situation.  Contact us today!